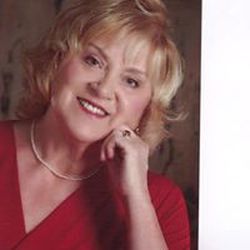 Born in East Providence, Rhode Island, Sharon Garlock Spiegel, the daughter of a pastor, grew up on the East Coast. The family moved several times, however, her formative years were spent in New York and New Jersey.  One of seven children, as the only girl for many years, she was dubbed, “Queen of the house”.

An inquisitive mind and creative imagination, (inherited from her grandmother, Jessie May Garlock), gave birth—at a very young age—to made-up plays and dramas acted out with her siblings.  Her first writing endeavor was in the sixth grade.  It was intercepted by her teacher when her “novel” was passed to a friend for a “critique”.

An avid reader from her first “Fun With Dick and Jane” book, she devoured literature with special interest in historical biographies.

When her family moved to Springfield, Mo., Sharon enrolled in college—eventually receiving a Bachelor of Science degree in Psychology.  She met her husband, Roger while in Springfield, where they both worked at the Assemblies of God International Headquarters.  Now married 46 years, they have three children, fourteen grandchildren, and one great-grandchild.  After marriage she continued her education and earned a Masters Degree in Christian Counseling.

She began teaching at South Park Christian Academy in St. Joseph, Mo. In 1977.  Through a series of events she calls, “a God thing”, she eventually received ministerial license with the Assemblies of God and became pastor of the church that sponsors the school, (South Park Assembly of God).  Since 1989 she has served as Pastor and School Administrator.

She marks the path of her life, with its twists and turns by the prayers and guidance of her godly parents and grandparents, with an emphasis on the leading of the Holy Spirit.

Sharon’s greatest joy is to know that her children and grandchildren follow the godly heritage, a foundation of faith laid by the miraculous salvation, deliverance, and healing of her grandfather over 100 years ago.

She stands strong in her belief of the promises of God for family that are found through the Bible.  One of her favorite things is speaking to various groups about God’s familial emphasis throughout Scripture.

Her spare time, (which is rare),  includes:   writing, reading, spending time with her grandchildren, traveling with her husband when the opportunity presents itself, including mission trips.

Her travels have taken her to Russia, Rome, Amsterdam, Haiti, Old Mexico, most of the Canadian Provinces,  and 45 of the 50 United States.  She has had the privilege of ministering in Haiti, Russia and plans to participate in the Prayer Bowl in Brooklyn during the 2014 Super Bowl.